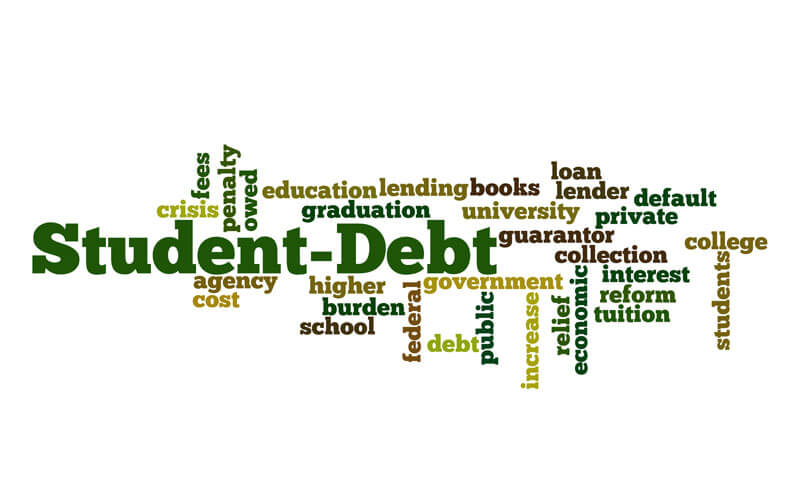 Now the question presented is whether or not “private student loans” are dischargeable in bankruptcy. After all, they are “private,” and not federally guaranteed.  Great question.

By comparison, private student loans are not guaranteed by the government whatsoever. There may or may not be a cosigner for the loan, but that has nothing to do with the federal government.

If you fail to make your loan payments, (and assuming there isn’t a cosigner), then the lender is out of luck! They have no guarantor at all. Naturally, if there is a cosigner (mom, dad, etc), then the private lender could attempt collection from them.

Mostly there is no difference in how bankruptcy handles private student loans. There is one key difference to focus on and this is the Income Contingency Repayment Plan (“ICRP”).

In short, it is nearly impossible, absent catastrophic circumstances (for example, a very serious and permanent disability) to wipe out a guaranteed student loan without first participating in an ICRP.  Most private student loans do not provide ICRP provisions.

In other words, there is no income contingent repayment plan available. And, you simply cannot participate in an ICRP if one is not allowed per the terms of the original student loan from the private lender.

A Glimmer of Hope!

Ms. Chelsea A. Conway filed bankruptcy in St. Louis, MO on December 7, 2009. She owed over $118,579.66 in private student loans and filed a proceeding within the bankruptcy to have these loans wiped out. The St. Louis bankruptcy judge refused to do so, ruling that Chelsea’s situation did not rise to the level of an “undue hardship.”  Chelsea appealed the Bankruptcy Court’s ruling United States Bankruptcy Appellate Panel for the 8th Circuit (“BAP”).

Note: Nebraska and Iowa bankruptcy courts are subject to the rulings of all 8th circuit appellate courts.

On appeal, the BAP disagreed with the bankruptcy court. In particular, the appellate court found that Chelsea was making a sincere effort to pay back her private student loans by having paid $5,734.28 to date, working multiple jobs, and having a history of attempting to improve her financial situation. In spite of Chelsea’s best efforts, she was earning less than $25,000 per year, on average, which is hardly enough to make any significant progress on reducing the enormous student loan debt.

Ultimately, the BAP stated that the bankruptcy court needed to compute Chelsea’s “present disposable income, if any, available to service…..a (student) loan over the course of an entire year.”

In short, the bankruptcy court just couldn’t assume that Chelsea was able to pay back her student loan debts but rather needed to specifically determine a certain monthly amount that was reasonable and available for such debts.

As of this writing, Chelsea is awaiting further hearings in the Bankruptcy Court in St. Louis to determine how much she must pay back to her private student loan lenders and what debts, if any, will be discharged.

Although not central to the BAP decision, it is very interesting to note that the court went out of its way to suggest that it did not necessarily have the authority to wipe out only a portion of a student loan debt.  Presumably, it’s all or nothing!

In Chelsea’s case, however, she had 15 separate student loans. The BAP was stating, nonetheless, that a bankruptcy court could discharge some of the loans but not necessarily all of them.

This could be potentially very good news for future debtors who are simply unable to pay back their private student loans in total but do have some ability to pay off smaller ones.  Of course, putting forth your best repayment effort before filing bankruptcy is essential to the process.

Had Chelsea’s substantial student loan debt been “federally guaranteed,” my view is that she would have struck out entirely because her combined monthly payments should be (or should have been) equal to her monthly disposable income. In theory, she wouldn’t be experiencing an “undue hardship.”  Thus, the distinction between private student loan debt and federally insured student loan debt becomes very important.

Get Help From a Trusted Advisor

Bankruptcy law is complicated and nothing can replace advice from an experienced attorney who will answer your questions and provide guidance on your specific circumstances. We can help. Contact us to speak to one of our experienced Omaha bankruptcy lawyers or to arrange a free initial bankruptcy consultation.